If you have symptoms of COVID 19, please call 330- 9105 to reschedule your appointment.

In 2007, the Virginia Urology Quality Assurance Program was developed to internally review prostate biopsy infection and post-biopsy sepsis rates with the goal being to reduce infection rates below one percent. At this time, quinolone resistance was becoming a significant issue, and the local antibiogram was used to guide prophylaxis choices. Beginning in 2010, after collaboration with infectious disease specialists, ciprofloxacin and cefdinir were given orally before and after biopsy. The protocol also included an enema preparation of the rectum. Continued evaluation of the current antibiogram revealed a small increase in the percentage of multi-drug resistant organisms; however, the extended antibiotic coverage was effective with prostate biopsy infection rates remaining low at under 0.5 percent. Compliance with this standard protocol is being continually assessed.  As Virginia Urology has been able to attain and maintain extremely low rates of infection, hospitalization, and sepsis rates using the current antibiogram, the benefit of targeted antibiotic prophylaxis based on rectal swab cultures is unknown. 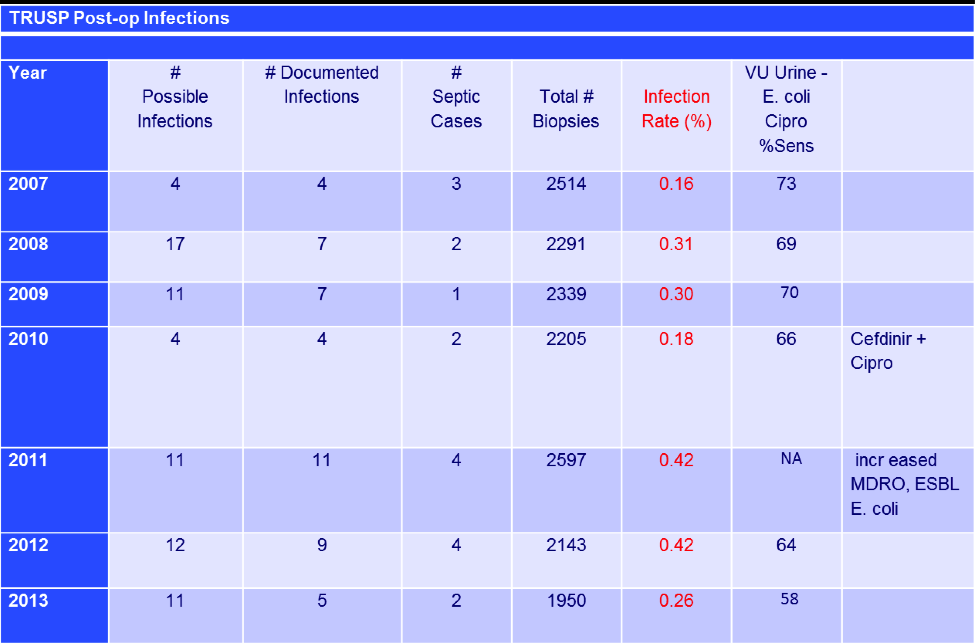